Nov 14, 2020 | Committing to the Practice of Thrivability

Preparing the Ground for a More Perfect Union

Just over half the US population and much of the rest of the world is puzzling over one question: why would anyone (much less 70 million people) continue to support Trump, given everything he and those associated with him have said and done? In fact, a growing number of countries have their own local version of this dynamic, complete with the dumbfounded disbelief of some part of the population.

There are many answers to the question. But here’s what my research suggests: Trumpism and its global equivalents stem from the simplistic worldview of reductionism and dominance that has shaped Western society since the dawn of the Modern Era. That worldview is steadily losing ground to a wiser, more complex, more life-aligned take on things. But it’s not going out without a fight. Under threat of irrelevance and replacement, it is digging in its heels and doubling down on the worst and most extreme expressions of its underlying principles. And that’s all it knows how to do. This is not a question of education or intelligence – those held in its sway are as smart and savvy as any of us. The lens of the reductionist worldview is simply too narrow to let them see what the rest of us can: that a more thrivable world is possible.

To be clear: what I’m pointing to is also not a matter of political party affiliation or personal preference, like favorite colors. Taken to its extreme as it has been, the mechanistic, reductionist worldview is a danger to humanity. It has brought us to the brink of extinction. We are in a crisis and intervention is required.

Understanding this dynamic may give us more to work with as we try to imagine where to go from here.

To start, it’s helpful to be clear about the basic storyline of the reductionist worldview: it’s a dog-eat-dog world; we’re all separate from each other and from nature; and we exist to compete and consume. This is the same paradigm that tells us things can best be understood by breaking them down into their component parts. Within that story, everything can be engineered and controlled as if it were one big machine. This is how we ended up with industrialized, mono-crop agriculture, for example, and rigidly standardized education. Through the lens of this worldview, it’s all “just that simple.”

But as the complexity and interdependence of the world has increased, this paradigm has been stretched to the breaking point. It can’t handle diversity, ambiguity and change. So when Trump supporters say, “Make America Great Again!” what they really mean is “Make America Simple Again!” What they’re calling for is a return to a simpler story and simpler rules, which for many entail:

It’s a harsh view of the world, but at least you know where you stand (or so the logic goes).

Trump supporters may find comfort in the simplicity of this worldview. And they may feel confident that those simple rules, reinstated and reinforced, would benefit them (all others be damned).

But “simple” is not how living systems – including societies – work and thrive. Nature shows us that diversity and complexity are the source of creativity and resilience. And history shows that clinging to simple narratives is precisely how civilizations crumble and fall.

Of course, everyone has a right to be happy, self-determining and economically stable – the things I hear Trump supporters say they want most. But it is not acceptable for these things to be gained at the expense of the rights and freedoms of others, nor at the expense of our collective life support systems. If we’re stuck with those trade-offs, then our story is too simple and our lens too small. 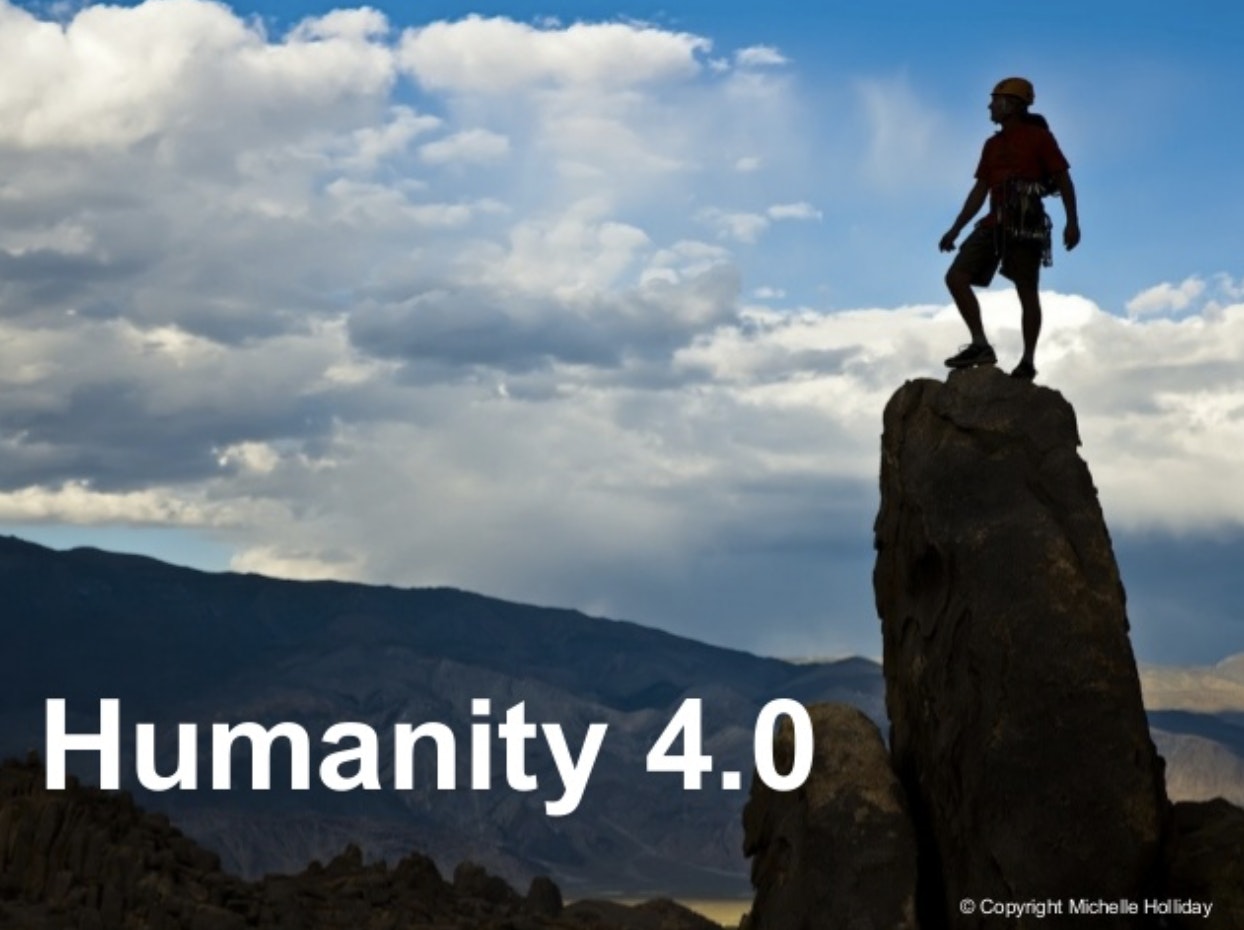 In my book, The Age of Thrivability, I document the valuable role the reductionist worldview has played in human history, as well as the ultimately disastrous consequences of its oversimplifications. I also point to the emergence of a more life-aligned worldview – one that is able to embrace complexity, to accommodate both individual and collective needs, and to adapt to change. In an illustrated summary of my research (pictured to the right), this new worldview is playfully positioned as “Humanity 4.0,” the natural successor of the previous three eras (Hunter/Gatherer, Agricultural and Modern/Industrial).

As I wrote elsewhere:

“The good news is: paradigm pioneers around the world are blazing an enticing trail, with innovative approaches to business, ownership and community. Grounded in the language and logic of living systems, these new options invite each of us to find our greatest personal reward by making our best contributions to the collective good. The early results are extremely promising.

The bad news is: the individualist, mechanistic worldview won’t hand over sole control without a fight. Donald Trump is the most extreme product of this worldview and its duly appointed spokesperson. Indeed, the entire US election can be understood as the individualist worldview having a massive temper tantrum. [Sadly, I was writing about the 2016 election.]

So, how do we put this unruly brat of a worldview (and [president]) to bed?

Certainly, we must resist and block the unreasonable demands and abuses of the tantrum.

Equally, though, we need to tell the emerging story, recognizing the values of individualism and also weaving them into a more complete view. We have to imagine together a society in which individuals can be honored even as they honor all life.”

So, what will help us “level up” as a nation – and as a global civilization?

The truth is: many actions are needed. But here is what I would contribute to the list:

We need to develop more spaces in which people can experience their capacity to navigate the creative, generative complexity of life. This may be the most important role of our schools, our businesses and our community initiatives: to serve as practice grounds for a resilient, compassionate, thrivable world.

I don’t believe it’s possible to talk someone out of their worldview. That’s not how worldviews work. A head-on appeal to the intellect alone more often triggers cognitive dissonance and combativeness, no matter how compelling the presented facts. Instead, I believe we have to give people a lived experience of a new reality, guided by expanded logic and life-centered values. As Buckminster Fuller famously said: “You never change things by fighting the existing reality. To change something, build a new model that makes the existing model obsolete.”

So, where the reductionist worldview sees only resources to be exploited and power to be grabbed in self-serving domination, what if more of us approach work and community with curiosity, care and the explicit intention to be of service to life’s ability to thrive? In place of supremacy, what if more of us embrace stewardship, rooted in a sense of reverence and responsibility? In the cracks where the behemoth of capitalism is beginning to crumble, what if more of us plant systems and structures that explicitly repair damage done and that support life’s ability to continuously regenerate itself? As anthropologist Jorn Bettin asks: what if we imagined economies as “ecologies of care”?

For example, what if we explicitly recognize our organizations as the microcosms of society that they are, and so what if corporate social responsibility comes to include – most of all – serving as a practice ground for a more thrivable world? What if each meeting came to be guided by that solemn (and joyful!) responsibility? In gathering around a new project, we might ask: who do we need to become if humanity is going to make it through, and how will we use this project as an opportunity to grow in that direction? This is certainly a more worthy goal than “increasing profit by 10%” – and there is mounting evidence that it’s actually a more viable way to get to that financial outcome.

This may sound unrealistic and utopian. But in my experience, this conversation is already happening at the edges of education, agriculture, tourism and industry. The crisis of Trumpism only adds urgency and importance to that work. If the human species is to evolve, Margaret Mead advised, the conversation must deepen.

Clearly, some of us need to focus on curbing the abuses of the outgoing worldview – and the outgoing administration. But many more of us also need to dedicate ourselves to expanding the practice ground for a more life-aligned worldview – to deepening the conversation and creating experiences of learning and growth, wherever we are. More of us need to recognize that how we do anything is as important as what we do, and that cultivating community capacity to care is the most important product of any initiative. This is a key pathway to helping our communities heal and become whole – and to becoming “the more perfect union” the US founders imagined. Only on that foundation will we be able to unite around the larger crises of climate change, ecosystem collapse and more.

The Need for Practice Grounds

[This is an excerpt of a chapter in The Age of Thrivability: Vital Perspectives and Practices for a Better World] How do we actively embrace our organizations and communities as living systems and work to cultivate thriving within them? How do we move forward into the...

END_OF_DOCUMENT_TOKEN_TO_BE_REPLACED

Singing in the Dusk

Sep 16, 2020 | Committing to the Practice of Thrivability

Last week, I facilitated a virtual summit on the need and opportunity for profound change in how our society cares for its elderly. And as so often happens in my work, there were lessons for all of us, as we look for wiser, more compassionate ways to care for each...