Aug 10, 2012 | Committing to the Practice of Thrivability

Ownership and the Living Organization

If an organization is a living system, is it appropriate for anyone to own it? Would it be more appropriate to see it as something we bring into the world and steward, like a child? How might that work, legally and financially?

These questions came up recently as I was writing a chapter on living organizations. More practically, they also came up as my partners in a new venture and I struggled to find a legal structure that fits with the living systems views at the heart of our work. 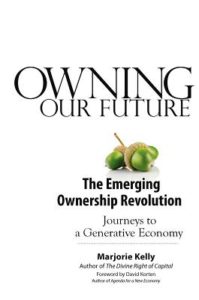 What followed was an exploration into emerging forms of ownership – what Marjorie Kelly calls “generative ownership models” in her new book Owning Our Future: The Emerging Ownership Revolution. In the book, she documents the experience and remarkable success of organizations around the world that are structured in new ways. These new models, she says, are focused on “creating the conditions for life,” in contrast to the dominant “extractive” forms of ownership.

The need for a revolution in ownership stems from four problems (as I see it):

The structural message of for-profits is: the organization is an “it;” it exists for itself.

The structural message of non-profits is: the organization is an “it”; it exists for others.

And the structural message of co-ops is: the organization is “us”; it exists for us.

As a result, for-profits are stereotypically predatory and inhuman… non-profits are assumed to be slow and chronically underfunded… and co-ops are too often sleepy and internally focused. We can work differently in each of these structures, but it takes extraordinary effort to work against the nature of the design. The question, then, is: are there alternative structures that more naturally and consistently lead to the behavior and outcomes we want – and that integrate the positive structural messages of each of the existing models?

In Owning Our Future, Kelly shows that new structures are indeed emerging around the world – structures that lead naturally to high engagement among customers, employees and community; that support responsiveness and agility; that honor the life within the organization; and that encourage responsible levels of growth. In the inspiring examples she describes, ownership is either broadly distributed among employees – and often other stakeholders, too – or it is held by a foundation or in a trust. In every case, broad stewardship is baked into the organization’s DNA. Notably, each is also successful according to traditional financial measures.

The UK’s John Lewis Partnership, for example, is 100% owned by employees. Individual shares are not owned and cannot be sold; instead, overall ownership is held in trust on behalf of all current employees. Profits are shared as a percentage of salary. With US$13.5 billion annual gross revenues, 81,000 permanent staff and a powerful culture of participation and engagement, the company is hailed as a testament to the power of such new models.

If we follow the trajectory – from ownership by a few, to ownership by many, to ownership held in trust – can we look ahead to imagine that a living company will come to be considered part of the Commons… something we bring into the world, like a child, for our benefit, for its own benefit and for the benefit of all life on the planet? This is not a call for the dull impotence of communism – in the examples Kelly provides, profit-sharing and decision-making privileges remain with those involved according to formulas they design. And the market results are at least as dynamic and powerful as traditionally capitalist approaches. But what if the legal entity came to be something held in trust on behalf of the individuals involved and the community? Indeed, “held in trust” seems an appropriate phrase considering the shift that’s needed, in business in particular.

Ultimately, what unites all the organizations Kelly describes – and every example of a for-profit, non-profit or co-op that breaks the structural mold – is a deep-seated intention to serve life. It’s also the ability to hold the paradoxes this involves. Living systems involve collaboration and community, but also predatory behavior and competition. Individual organisms serve their own needs, even as they serve the needs of their ecosystem. It takes wisdom to integrate all of these seemingly conflicting goals within an organization. The revolution Kelly describes is, most of all, a search for organizational forms that support such wise perspectives and actions.

I’d love to hear your thoughts, experiences and reactions.